Marathon Land was created in 1989, on the occasion of our special love and passion for animals.

We designed an area of ​​15 acres, a standard center, framed by deluxe rooms of the Guesthouse, the specialized facilities of our Kennel and the specially designed training area. Just 30km from Athens you can only visit us to guide you.

Marathon Land was created in 1989, on the occasion of our special love and passion for animals.

We designed an area of ​​15 acres, a standard center, framed by deluxe rooms of the Guesthouse, the specialized facilities of our Kennel and the specially designed training area. Just 30km from Athens you can only visit us to guide you.

Passion
We have a passion for our work and a great love for animals, which is why we want to offer them the best.

Loyalty
Raising, hosting and training an animal is a joy and a work of life for us and we always do it with dedication.

Novelty
We seek the best, we work hard and tirelessly to achieve it and we are distinguished for it

Professionalism
We deliver on what we promise. 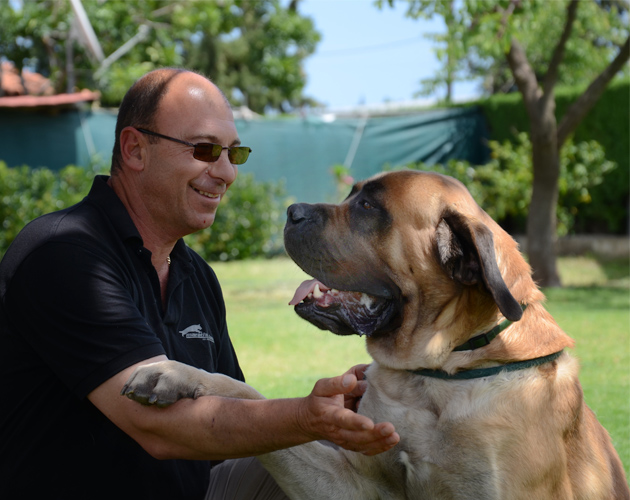 He was born in Athens.

He is the inspirer and founder of Marathon Land

Founding member of the Kennel Club of German Shepherds of Greece and President of the Group from 2005 to the beginning of 2013.

International Judge of Morphology of German Shepherds since 2004, has judged in Greece and abroad and, Judge of Labor of the Working breeds of FCI.

Has been training dogs professionally since 1989.

Since 1997 his name has been registered in the official E.N.C.I. (Italian Kennel Club) and since 2000 has the certificate of experience for teaching the Rules of the Race, as a Supervisor and as a Trainer by the German Association of Working Dogs (D.H.V.)

He taught the PTDI dog trainer school the course of competitive training, preparing students for their participation in labor competitions (IGP (IPO) 1, 2 & amp; 3).

German Shepherd breeder under the name Marathon Land since 1992, has presented samples of his breeding in Greece and abroad.

ΓGerman Shepherds of his breeding have been proclaimed Champions of Greece.

He has trained and successfully presented in competitions – work exams, more than 50 dogs of different breeds, at all levels.

Share!
Login to Marathon Land
Reset Password
Enter the username or e-mail you used in your profile. A password reset link will be sent to you by email.

This site uses cookies to improve your experience while browsing the site. Of these cookies, cookies that are categorized as necessary are stored in your browser, as they are necessary for the operation of basic functions of the website. <span class = "" title = "" We also use third-party cookies to help us analyze and understand how you use this website. These cookies will only be stored in your browser with your consent. You also have the option to opt out of these cookies. However, opt out of some of these cookies may affect your browsing experience.
Necessary Always Enabled

The necessary cookies are absolutely necessary for the proper operation of the website. This category only includes cookies that provide basic features and security features of the site. These cookies do not store personal information.